Well folks, its all over. Jared had his last chemo treatment yesterday. We were both very excited. The Nursing staff in the Infusion room at the Huntsman are absolutely wonderful. Its an amazing place with an angelic atmosphere. It truly was a unique life changing experience. I met so many wonderful people, saw so much love and compassion. I was able to whiteness many wonderful moments of people reaching out to others, and new friendships being made that will last a lifetime. I am blessed to have be a whiteness to such Christ like acts of love and kindness. I am grateful to a Father in heaven who loves us and gives of this little moments of what heaven must be like. Thank you all for your love and support through this crazy time in our lives. We love you!
Posted by The Collins Clan at 8/14/2009 10:17:00 AM 2 comments:

This Is Jospeh pinning Hyrum to the floor zurberting his belly. If you cant tell Hyrum is telling Jospeh to stop it, and Joseph says no I am going to zurbert you forever. It was just so darn cute I had to share it.

This was so funny!! We were gathered together waiting for the fireworks to start, and decided to play redrover. Jospeh was the 1st one picked. And this is what happened to Leiah, Wilkies wife. 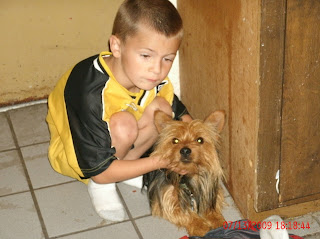 Well about a month ago our sweet little dog Shaggy Doo was hit by a car hear on main street, and ever since then we wanted to get a new dog. Well our first try was a no go. We pick up a dog from the animal shelter. He was a Chiuaua mix, still in his puppy stage, and was very cute. We named him Pedro. But unfortunatly he kelpt snipping at my kids, and making big messes. SO we took him back. And just this past monday we stopped by the animal shelter again, where we found this very cute and fun loving Yorkie. He was just do darn cute that we fell in love with him and brought him home. I took the kids with me this time to make sure that the dog would be good with them. And he was. Joseph and Hyrum just love him. He was a stray, but apparently his is house broken, and is very mild tempered. He is a lot of fun. We named him Taz. Although the next day after starring at him for a while he started to look alot like Cheubacca. But taz was already stuck by then. SO he is Taz the Wookie. I know I am a werdie but I like to give my pets long names. I had a cat named Missy Cecilia Fritzwald Pew III, and our Dog was Shaggy Douglas Doo. Its all about the name. Anyways, we love our new dog, and are looking forward to lots of happy new memories with him.
Posted by The Collins Clan at 7/16/2009 07:14:00 AM No comments: 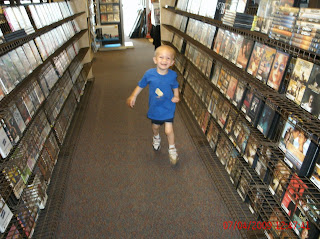 Last night I had just gotten home from work around midnight to find everyone asleep, but my 3 year old who was covered in his own poop. He is being potty trained so he pooped in his undies and took them off then took the poop out of them and put it in the toilet. I guess he was trying to clean off his hands cuz the entire toilet seat was covered and his arms and his stomach. I love being a mom!!!!
Posted by The Collins Clan at 7/12/2009 05:57:00 PM 1 comment:

Things have been going pretty darn good lately!! Jared has been at his job for the past 2 weeks, he lost all of his hair from the chemo. And is hopefully getting better. I am going to enjoy the last week of my summer break befor a start school again. I have been so lazy, it feels nice. I am going to miss not stressing over finishing school assignments, and reading books for fun. The kids are driving me crazy, but I sure do love them. Joseph gets to start Kindergarden this comming up school year, and Hyrum will still be in pre-school. We are trying to help Jospeh with his abc's but are getting little progress. Any hints? Life is great!!
Posted by The Collins Clan at 7/12/2009 05:46:00 PM 1 comment: